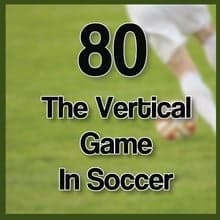 Putting the ball up in the air... should be do it, or should we keep it on the ground? Choosing what to train in youth soccer and when to train it is a combination of science and art. US Youth Soccer gives us some useful guidelines, but how closely we follow those guidelines requires a look at individual players, team strategy, club strategy, and even individual coaching philosophy. Let's explore the vertical game in soccer! 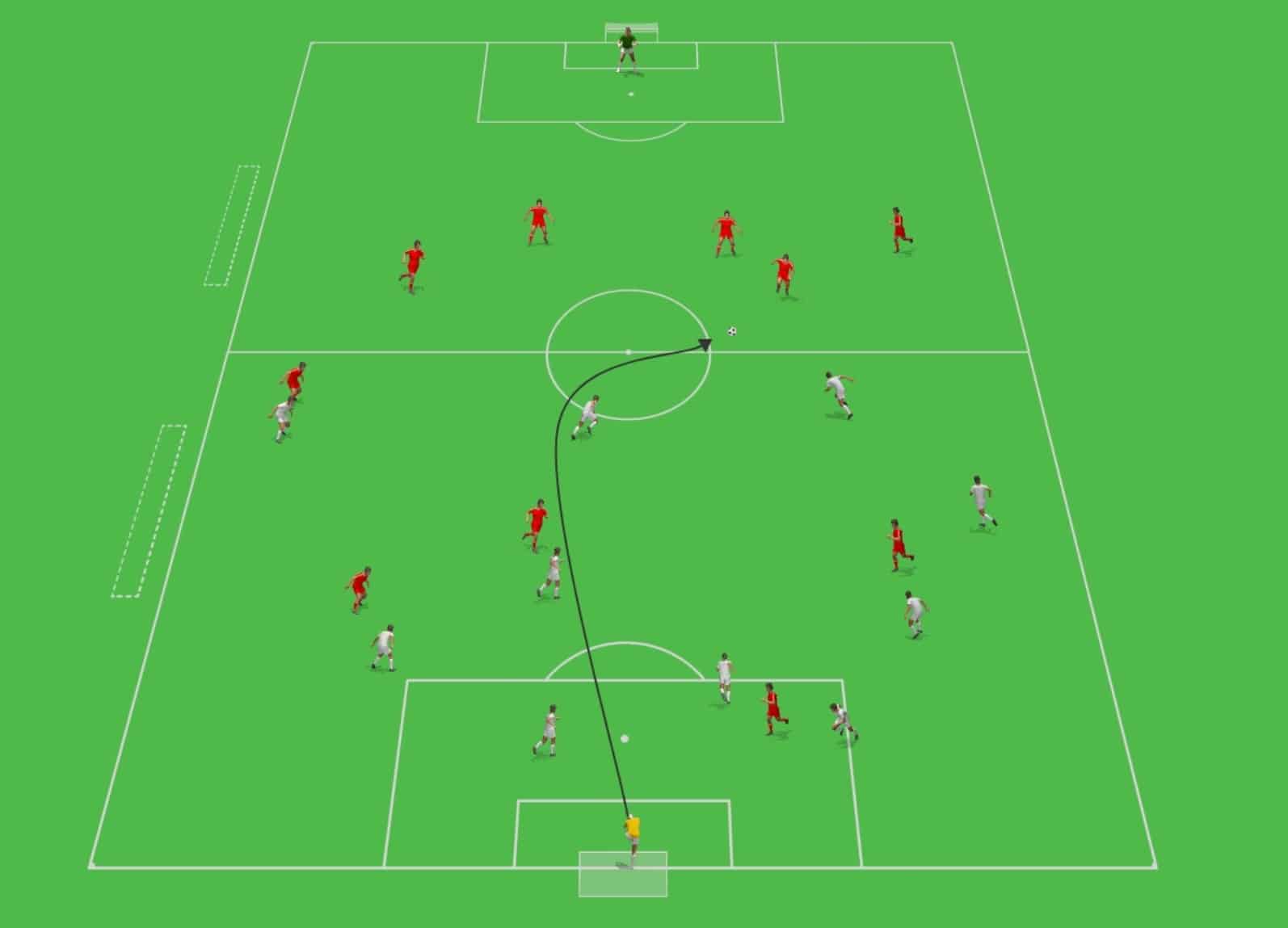 Big Punts from the goalkeeper

Why Talk About This?

This episode is dedicated to coach Rick Watts and the excellent coaches of the Saint Mary's Soccer Club in Maryland. Rick is a listener and member of our Soccer Sidelines community. He's also the VP for Recreational Soccer at Saint Mary's. He sent me a question last week  - Thanks, Rick! - along with an email exchange between he and a few of his coaches. They were exploring the vertical game, when to use it, if they should use it, etc.

In this exchange, coach Dave, one of Rick's coaches - presumably from his recreation program - asks "(I) Want to clarify a rule with you for U8 girls. It was my understanding that we are supposed to keep the ball on the ground due to the shortness of the field we play on. We played a team last week that kicked in the air the majority of the time. I mentioned it to the coach and his response was that’s how soccer is played. I just want to make sure of the rule so I can teach my girls the right way to play."

"(I) Want to clarify a rule with you for U8 girls. It was my understanding that we are supposed to keep the ball on the ground due to the shortness of the field we play on. We played a team last week that kicked in the air the majority of the time. I mentioned it to the coach and his response was that’s how soccer is played. I just want to make sure of the rule so I can teach my girls the right way to play.”

Rick's response to Dave reflected his experience and some very specific statistics he's been keeping on the game. He asked for my thoughts on the subject and suggested that this might make a good subject for a podcast.

Well, first, thank you Rick for sharing this idea! I agree that this makes a good subject for the show, and I think this is a great question to help illustrate some important principles of a developmental style of coaching - as well as give us some insight into how we think about what we teach.

What is The Vertical Game in Soccer?

Put simply, we're talking about putting the ball into the air. This could be a long punt from the goalkeeper, a chipped pass over the heads of pressuring defenders, a high diagonal long pass over a group of players, or a high cross from the wing or as a corner kick into the box.

Big Punts or "goal kicks" from the goalkeeper 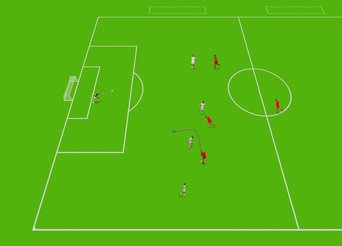 The above illustrations show a few examples of the vertical game in soccer. There are many variations to this, of course, but the simple explanation of the vertical game is that the ball is played in the air as part of the game tactics. The objective may be to change the angle of attack, move the ball into space behind a pressuring opponent, or maybe to give teammates an opportunity to score. The opposite of the vertical game would be playing the ball on the ground.

The vertical game in soccer has a well known effect on the game and individual team strategies. In the February 27, 2019 match between the US and Japan in the She Believes Cup, Ali Wagner was chatting with JP Dellacamera about the vertical game as being one of the strengths of the US Women's National team.

The US Women's National team demonstrates one positive example of the vertical game being employed in a meaningful and productive way. 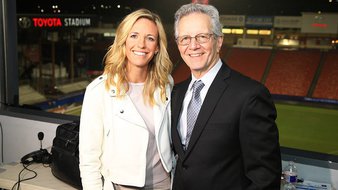 Ali Wagner and JP Dellacamera from Fox Sports One

Should We Play a Vertical Game or Not?

The discussion that Rick and his coaches are having is whether or not to play a vertical game. One coach, Dave, was saying that he thought the club policy was to use the "buildup lines" and play out from the back - primarily with the ball on the ground.

What Dave was referring to comes from US Youth Soccer Initiatives published in 2015-2016 that I assume have been adopted by Saint Mary's club as a way to relieve pressure on young players and encourage them to "build up from the back." In other words, to take and keep possession early on in the attack from the keeper forward. This guideline (often enforced during small sided games) states that when the goalkeeper has the ball int he run of play or as part of a goal kick, the opposing team needs to fall back behind the "Build out line" which, when combined, divide the field into roughly thirds.

The context here is a small sided U8 Girls team and from the rest of their conversation, I presume this game was played in 4v4 format on a small field. In the case of a 4v4, the are no keepers, so there would be no need for goal kicks. Players don't start working on chipped or lofted passes until they are 9, so in this case, I agree with the advice Rick gave to his coach. Lot's of lofted kicks in the air from the goal or otherwise would not be my choice for playing at this age. If the same question were asked of my high school aged team, I'd say the players are not only capable, but depending on the opponent and game conditions, incorporating the vertical game may be a reasonable part of our strategy - particularly if it allows players to take advantage of an opponent that is too high up the field and leaving a wide open space between the second to last defender and the keeper. I might like to get a few 1v1's going with the keeper in this case and use a lofted long cross to get that going.

My answer to whether or not we should play the ball in the air is: it depends.

I've never been much of a "big boot" from the goalkeeper fan. It always gets some Ooo's and ah's from the sidelines, but prior to talking with Rick, I used to consider the "big boot" a 50/50% chance at a turnover. As a possession team, I've always thought it better to hold onto the ball than give it to the opponent. Random kicks seemed to me to be a coin toss as to who was going to win the ball. I didn't like those odds.

After talking with Rick, I am changing my tune a little. It seems Rick has been keeping stats during games on this particular phenomenon. He had one of his team managers keep a tally every time a ball was put in the air and then another tally if the ball was turned over; this didn't include shots on goal, corners or crosses, just punts and passes in the air. After that, it was a matter of doing the math.

He discovered that there is a 63% chance that the "big boot" ball from the goalkeeper would result in a turnover to the other team. Compare that to a 27% chance of turning the ball over when playing it on the ground.

Have I seen effective big kicks down the field on older teams? Sure! But there are things coaches should be doing during practice sessions to ensure the "big boot," if part of a team's approach, is coupled with fast players who can get beat the opponent to the ball and preferably mount an attack deep inside the opponent's half. If the "big boot" is done without the benefit of field players who know it's coming and can mitigate the threat from the opposing team, a team might find itself defending against another attack and being faced with another boot-or-no-boot situation 90 seconds later - or worse, walking back to reset positions after an opponent's goal.

Soccer teams can and should, in my opinion, incorporate the vertical game into their toolbox. If it's done right, it can be a great boost to a team's abilities. Done poorly though, and it's more than 50% chance of a turnover waiting to happen.

When to Introduce the Vertical Game in Soccer

As with most physical, mental, and emotional skills, the experts provide guidelines for when to introduce these to players. Since the vertical game has several different components - from a goal kick to a lofted pass to a cross, etc. the answer of when to introduce each is informed by the age and developmental maturity of the players. Goal kicks and corner kicks can be introduced as early as 6-years-old, for  example. But chipped/lofted passes don't get introduced until players turn 9-years-old. I've created an excerpt of the United Soccer Coaches competency matrix below to illustrate a few of the vertical game elements, when they should be introduced, and when they should be mastered.

Essentially what this means is that the vertical game in soccer is introduced incrementally.  The "start training" age doesn't mean that players are performing these tasks in games yet. Just because a player turns 9, it doesn't mean he or she will be able to start training the chipped or lofted pass. All of these ages have a good two year window on either side of them where players may actually be. Some players will be more advanced and start a little early. Some players will be a little behind the average and start a little later.

Just because the table says a player should have a skill "mastered" by a certain age, it still doesn't mean that a 14 year old is going to be able to cross from a wing at the 35 and put the ball in front of the net for a strike opportunity. These are guidelines only, but it's clear from these guidelines that the vertical game is an important part of the way the game of soccer is played.

The Verdict on the Vertical Game in Soccer

The vertical game, from "big boots' in the back, to crosses made by Tobin Heath 2 feet form the opponent's goal line the vertical game is very much a part of the game of soccer. Introducing the vertical game to youth players takes place over a number of years and should be practiced in the proper age ranges if they are going to be incorporated into an intentional match strategy. Random "big boot" kicks from the goalkeeper can have a high likelihood of being intercepted by the opponent, and therefore, should be used carefully by teams 9 and older. 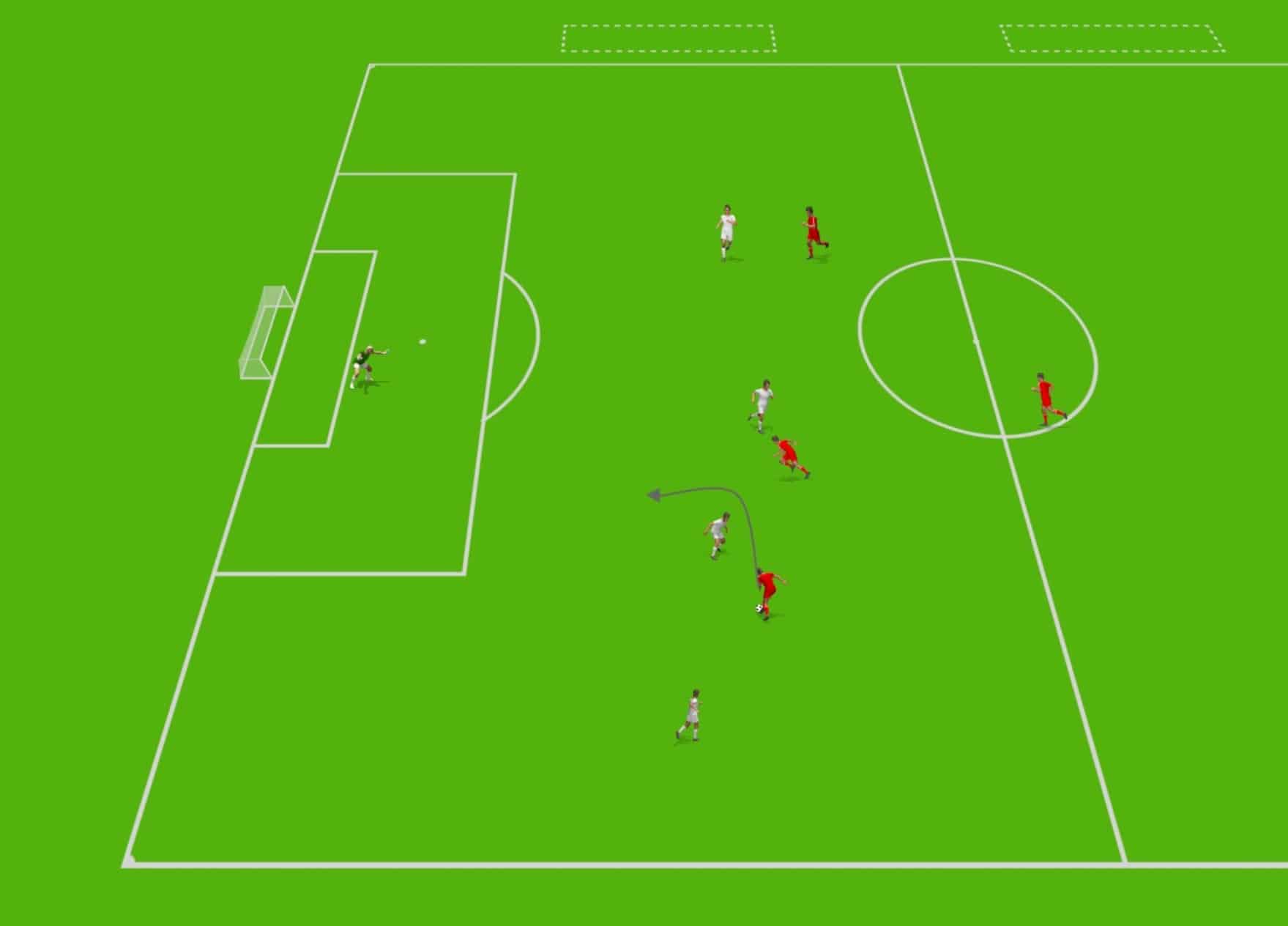