When you're finished with this episode, it might be hard to unsee what I'm about to share with you. It's like turning the lights on and noticing ants in your kitchen. You can't just turn the light off again without knowing that those ants are there and wondering what effect they're having on your food supply or if they're going to be crawling up your pant leg if you stand still too long.

The concept of Relative Age Effect (RAE) is important to you for a few reasons. What month during the year your athlete was born affects how they will be seen in the world of athletics. How they are seen can affect the resources they have access to. Some potentially great athletes will end up leaving sports prematurely as a result of RAE. Some athletes will take their foot off the proverbial gas pedal right when they should be stepping on it. Many coaches are influenced by RAE without knowing it. And worse still, some coaches are aware of RAE and use it to undermine the development experience we should be giving kids in favor of winning matches & boosting the reputation of their club for those who believe a winning record is a good indicator of the development experience. 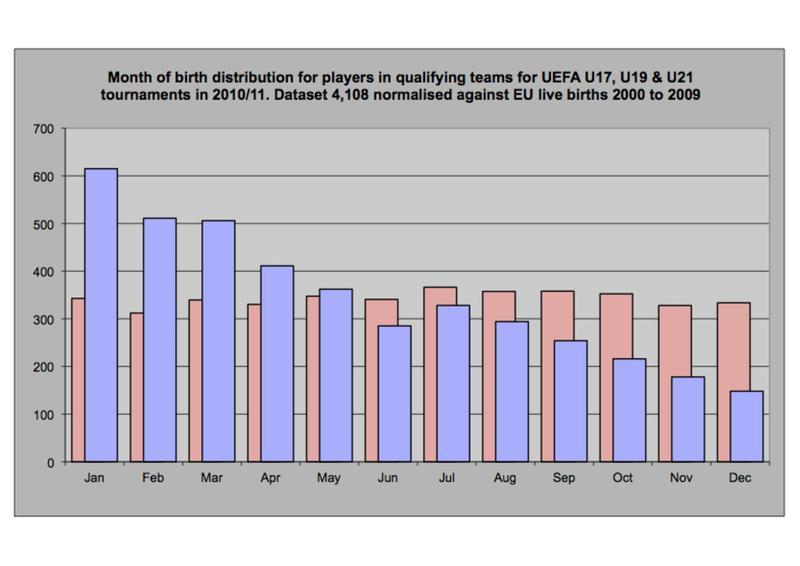 What is The Relative Age Effect

Simply put, the Relative Age Effect is a bias that exists in the selection process for youth athletes. Kids who are born on a date closest to the age cutoff date for a program tend to be better represented in sports than those born later in the year. So if we're working in a calendar year system where kids are grouped by birth year beginning in January and ending in December, we'll see more kids "selected," when there is a selection process from the first quarter than we will from each subsequent quarter.

If your son or daughter was born in the 3rd quarter, July through September, they are less likely to be "selected" than they would be if they were born in the first or second quarters: January through June. Kids born in the 4th quarter kids are statistically picked the least.

This isn't a new thing or a one-off phenomenon. I put a paper from 1984 in the resources section along with a few other resources that suggests we've been talking about RAE at least since then. ​

The questions I've asked in researching this are:

Why, When, and How: the Relative Age Effect

Imagine yourself looking out over a pool of theoretically same age kids. These kids have volunteered to be part of a competitive selection process. They're all 12 years old (all born in the same year). You think your job is to pick the biggest, fastest, and strongest kids for two teams that will compete in a local competitive league. You and your fellow competitive coach must chose 20 kids out of 60. What are you looking for?

If you're like most people, when your objective is to field the "best" teams who will win the most number of games, you're looking for the biggest, fastest most game-aware kids in the pool, right? Don't look at their birthdays. Just pick!

Kids grow fast and they grow unevenly. Between the ages of 11-16, they're all in varying stages of rapid growth and maturation. Child development is so varied that two kids born exactly on the same day can be developmentally mature 1-2 years on either side of the date in their birth certificate. Some kids start to grow sooner. Some start a little later.

Does it make sense that the kids born in January will, as a general rule, be a little bigger, faster, and cognitively aware than kids born 11 or 12 months later? If this part doesn't make plain common sense, just accept my word for it for now and refer to the articles I've provided for you in the resource section of my show notes. I even embedded a short video that explains the concept with accompanying charts and diagrams. Have a look, listen, or a read there so we're on the same page.

The selection process itself, especially in the context of competitive soccer where winning matches is more important than youth development, the relatively older players will bubble to the top while late bloomers will get lost in their shadows.

Developmentally minded coaches and parents usually get down hearted at this point - the moment when the light bulb comes on and illuminates the Relative Age Effect. It's a real thing and it's causing us to overlook some potentially great talent.

The Implications of the Relative Age Effect

Generally accepted and published implications are pretty well known. Late bloomers aren't getting picked. Through no fault of their own, the time of year they were born affects millions of kids working their way through youth programs. A date on the calendar puts them in a pool with others of the same year. Those who have not started their growth spurt or are not as far along in their physical or mental development are being left behind. They don't get into the academies. They don't get the best coaches. They often get down on themselves and don't enjoy the experience as much and many drop out.

RAE doesn't just affect the late bloomers either. Early bloomers - those kids who did get picked on the merits of their birthday - are, in some cases laying back. They've been given a signal that they are already better than many of their peers and they stop trying as hard.

A playing field that is not level has the effect of dropping some athletes (late bloomers) and making some athletes apathetic about their training (early bloomers). It distributes coaching and other resources unevenly, and it leaves us as a country missing out on some potentially awesome talent that took their skills and abilities elsewhere.

In my mind, the existence of Relative Age Effect bolsters programs like recreation and other non-competitive programs where tryouts do not perform a filtering function. You heard me talking about it in episode #86 titled Character Matters in Athlete Selection, and in several other episodes like #73 Improving Access to the Game, there are plenty of barriers that already exist in the youth sports environment. Open play, easy access, multiple sport participation, and low costs should all be a focus of our discussions going forward.

Competitive programs can be good developmental experiences too, but I've had many coaches confide in me that the selection process is weak at best. If anyone tells you they can look at a 12-year-old in a tryout and know how that kid is going to develop as life does it's thing with them, they're lying.

Selection itself has become much more about who can pay vs who belongs in a more competitive environment. If this were not true, then we'd see 10:1 ratios of kids playing recreational soccer vs travel soccer. Take a look around your town and tell me I'm wrong. In my area, most of the fields are populated with "select" and "travel" players. Our recreation program should be fat with kids playing, mixing and matching sports, coming and going as their passions take them - and when they come up around 14-years-old or so, they should at that point start scoping their attention to a smaller number of sports they can deep dive into.

This wasn't youth development in my mind. It was part of a marketing plan. He was trying to gather as many trophies and medals that he could in order so he could have photos and press releases to attract more unwitting parent and their money.

I don't know how many parents truly understand the system. I believe too few of us are made aware of this stuff - which is one reason I produce this show. Many parents come to me with a first-time, never touched a ball player and are already asking where they can sign up for a "select" program. Listen. I get it. Every parent wants their kid to be special, but standing on a podium with a medal around their neck doesn't make them special.

I have so often seen coaches sacrifice development for the sake of winning matches. It is possible to win matches in a strong and healthy development environment, but it is easier to take a handful of kids, promote the biggest and fastest ones in games, bench the late bloomers, and win, win , win! Some parents insist on winning or they take their child to a different team! I kid you not. Their kid could be having the best developmental experience possible (which for some kids includes riding the bench), but they don't see the developmental lessons. They see a loss on the scoreboard.

Too many people fall victim to phenomenon like the Relative Age Effect because we are collectively focused on having a bigger number appear on our team's scoreboard each weekend. Coaches who are truly prioritizing Development, are going to lose some games they could have won.

What Can We Do About RAE

RAE isn't going to go away. As a parent, just being aware that it exists should help you to become a more discerning agent for your son or daughter's youth development experience. You likely can't do anything about RAE when you're part of a tryout, but you might have a question mark over your head now when you're shopping for clubs. You might have a question mark over your head if your child is born later in the year, loves a soccer ball, and isn't getting picked for a team. Maybe you can open a discussion with your local clubs about what they are doing to minimize Relative Age Effect in their programs.

Coaches and Clubs need to be intentional about development. I've seen some ideas that can help. Here are a few to consider:

The biggest thing I think we can all do collectively is make sure the programs we manage or participate in have a long range, developmentally focused plan. We should consider it unacceptable to use kids for their entertainment value and ability to win game and pay our fees. We should be doing everything possible to make access to our sport easy, cost effective, fun, and focused on developing the whole child. Winning youth soccer matches as a goal is counterproductive in the younger ages. There will be plenty of time for focusing on scoreboard wins after kids level off around 17-years-old.