What is a Play up or Play Down?

First things first. What are we talking about? A play up situation is where a player is grouped with players who are older they he or she is in chronological age. Most clubs (particularly on travel or select teams) will use a birth-year system to group players - meaning all kids born in 2003 are grouped together and all kids born in 2004 are grouped together with their own age group. Some clubs use school year groupings, where all first graders play together, all second graders play together, etc.

In school groupings, there tends to be more variety of ages, and the basis for decision making is informed by classmates who know one another and tend to move together through the system as they do in grades - moving up each Fall to the next level.

It's pretty common to see one year difference on travel teams using birth year groupings. Kids born in 2004 may "play up" with kids born in 2003, for example. But age bands are more limited in competitive soccer.

In recreation soccer, the rules generally relax a little, but still follow some safety guidelines I will describe in a few minutes. We might see three-year age bands, for example. a 10U might include 10 year olds, 9 year olds, and a sprinkling of 8 year olds playing up. Things get dicey the broader the age band gets - which I'll talk about later.

Safety is Number One

As with most everything in youth soccer, safety trumps everything. If an environment is not safe, then we fail. You've heard me talk about this many times before. Play up and play down situations are no different.

As kids grow older, they generally get bigger and stronger. This is common sense, right? We might consider what would happen if we pit a smallish 8 year old against a larger 11 year old on a soccer field. Someone could get hurt.

Before you say, "but my 8 year old has an 11 year old brother, they play all the time, and my 8 year old does fine against he and his friends" - things change in competition or when the children playing are not relatives or friends.

In the world of youth soccer, a great deal of mental energy has been spent calibrating the environment to the various age groups. We adjust the ball size as legs grow stronger. We adjust field size as kids can run farther and see more over the field horizon. We adjust the relative ages to group kids with similar hormonal makeup and attention to emotional and environmental queues. The rules are adjusted to ensure we don't introduce head injuries to kids before their craniums are strong enough to manage the impact.

If we took an 8 year old with a still yet unformed cranium - who is meant to play with a number 3 ball, and introduce them to 25 headers per week with a heavier number 4 ball, we're asking for trouble.

Kids don't all develop exactly at the same rate. Some mature faster or slower. A given player can be anywhere along the maturity spectrum 1-3 years on either side of their chronological age. I'm sure there are even more exceptions that have happened in history.

Maturity isn't just about physical maturity either. Emotional maturity governs their ability to interact with one another and handle pressures of the game, mental maturity governs their ability to see the field, understand tactics, and process actions. Hormonal maturity can govern their self control, and the kind of things and communication styles that influence their behavior on the field. As a coach, it would be a mistake to berate or belittle a 16 year old boy in front of their peers or female onlookers, for example. Girls have bad days as they're coming up through puberty. The total maturity of each individual player matters.

Who Should We Talk To?

Every club does things a little differently. In my club, the people involved in a play up or play down situation include the releasing coach who can provide insights about the player and about the family; the receiving coach who can provide insights about the receiving team, about the age bracket, and who needs to be aware; the Registrar who needs to make transfers official, the Club President who ensures that all parties have talked with all other parties, the Director for the program a child is transferring into or out of, the Director of Coaching who ensures we're following proper header rules, ball sizes, and pitch sizes, Officials who may need to adjust the rules for safety reasons, the Treasurer who ensures proper fees are paid, and the parents.

As you can see, it's not a simple matter of one coach handing off a player to another coach because the players has friends on another team. There are lots of moving parts.

Good reasons to Play Up

John O'Sullivan from Changing the Game Project proposed what i think is a good list of reasons to play up in a March 27, 2017 article titled Should My Child Play Up? The Do's and Don't of Moving Kids to Older Age Groups. He makes three main points here:

He cautions that physically mature kids may still be socially or mentally behind older players. Technically or tactically mature players may also develop bad habits or stop playing confidently if they are grouped with older players. Also the speed of play is something that younger players need to be eased into. Moving them too quickly can have a negative effect and even cause injuries that have nothing to do with other players, but are the result of simple overuse.

In all cases, the situation should be monitored and reevaluated down the road. Moving a child back to their own age group is often exactly what the doctor ordered in terms of getting development back on track if things go sideways.

Bad reasons to Play Up

In the same article I mentioned earlier, John O'Sullivan lists what I think is a pretty good list of BAD reasons to allow play up situations. These reasons are even more relevant as children move into more competitive environments:

I have heard every one of these reasons cited by players and coaches alike. If any of these resonate with you, I encourage you to take a look at John's commentary in the article I quoted.

As a Club official, I'm careful about setting the rules for each age grouping we put on the field. We always play down to the lowest age group when it comes to header rules, for example. If I have six 13 year old recreation players playing in a 13U age band where most of the players are 11 and 12 years old, we don't allow headers. It would be impossible for officials to know which kids were allowed to make headers and which kids can't during a game. Fouls for inappropriate headers could not be applied fairly, and the risk of an 11-year-old performing headers against the institutional wisdom of US Youth Soccer guidelines would be high.

If I'm considering a play up across age bracket lines, I have to consider the pairings of the youngest players playing up vs the oldest players playing on age for that age bracket. Is it a fair match to put an 8 year old - who is supposed to be playing 4v4 in popup goals in 3x15 minute periods with a #3 ball on a 30x20 field against an 11 year old who is meant to play 9v9 in 2x30 minute periods into 6.5x18.5 goals with a #4 ball? As a general rule, there is no contest and play would not be fair. 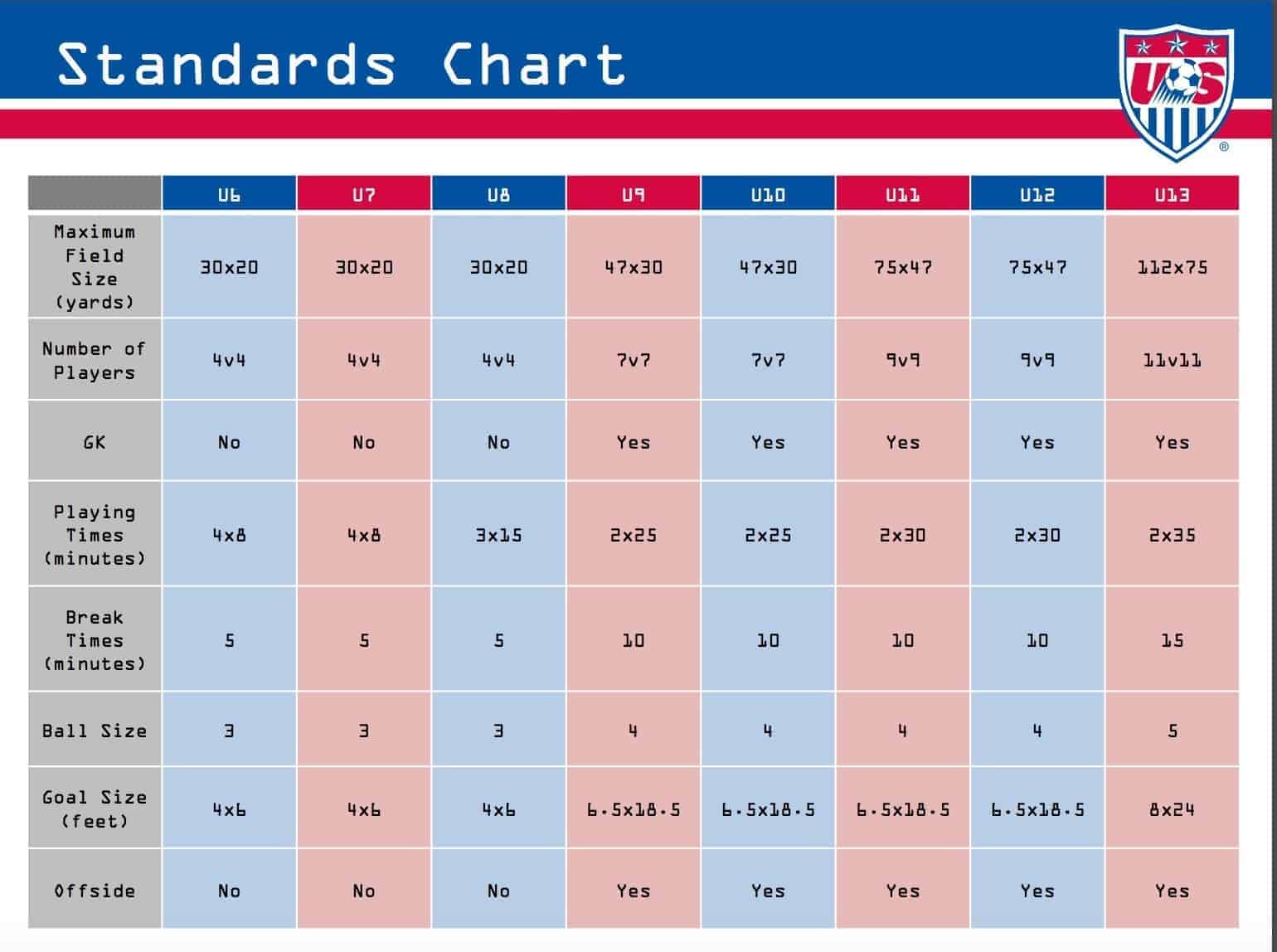 Exceptions to the Rule

There are some exceptions. I've made them myself. I've had players play in my recreation program with physical or mental disabilities that made their age on the field different from their chronological age. If safety has been addressed and it makes sense to allow a play-down situation, then it can be done. I emphasize, however, that this is an exception, rather than a rule.

Play up and/or Play Down situations are very player specific, affect more than a single player, require care to execute properly, and should be monitored. In most cases, play up or play downs are not necessary and shouldn't be done for car pooling or other external factors not related to the development of the child. Play up or play down situations made for the wrong reasons can have far reaching consequences that affect every other player on the field and can result in injury. What seems like a simple request isn't really simple.

When questions come up, it's best to consult both your coach and the guidelines set by your organization and national bodies that govern these types of transfers. It may still be the right thing for your child, but now hopefully, you are a little better equipped to make the decision that's best for everyone.

Playing on More Than One Team

Alphabet Soup in US Soccer