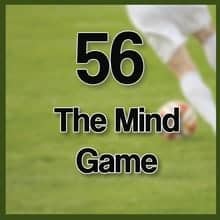 The crucial difference between an elite performer and one who is good is often not visible to the casual observer. Having a good Mind Game can make all the difference!

It Doesn't Matter the Setting

It really doesn't matter what sport your child wants to play. It doesn't even matter if they want to play sports at all. Athletic competition is just one way kids work on their mind game. Athletics to academics... even hobby and job performance are all influenced by our attitude.  The approach we take to practice, to games, to winning, to losing, and to making mistakes isn't entirely extrinsic - influenced by what happens to us. It is influenced more so by how we see the world.

Two people can see exactly the same situation. One will see adversity and impossibility. Another will see opportunity and excitement. Nothing about the environment may be different - other than the way these two people either naturally perceive the world - or choose to perceive the world. Perception makes all the difference.

When I was a kid, my primary sport was swimming. I had a coach who pushed pretty hard. Day one tryouts included swimming for one mile. Anyone who failed to swim the mile, who touched the bottom or who touched the side in any way other than for a flip turn was cut. As the season unfolded, he threw all manner of physical and mental challenges at us.

I remember practices where he would stand himself in front of us in a pool area that was well over 80 degrees, tell us that it was cold in there and raise goose bumps on his skin. He played mental games with us: "You're not a man," he used to yell, "until you've puked in the scuppers and kept swimming!"  He would challenge us to races, then change the rules as the race kicked off. He would fill the air with the smell of warm fat pretzels - hot from the bakery, set us against one another and tell us whomever out lasted everyone else in suicides (a never ending string of overlapping sprints across the pool) who earn a hot reward.

The point of his games were not lost on us. We knew he was breeding us to not only be competitive, but to win - and to like the feeling of winning.

I remember having to sit next to my team mates on the benches with my eyes closed. He would hold a stop watch, run us through a starter sequence, and tell us to raise our hand when we were done with our mental race. It was remarkable to all of us how close our mental "imaginary" race was to our actual race times. He sent us home with homework to run our races over and over again in our minds while trimming time off our best time.

"If you can see it in your mind," he used to say "you will do it in the pool." Our coach was big on improving the mental game.

Later in life, I discovered that swimming - the act of putting one arm in front of the other over and over again for 4,400-8,000 k yards twice per day, six days per week, would be perfect mental training for things later in life. We literally learned how to tuck our heads, settle in behind another swimmer, and push our bodies with our minds. There were no distractions in the pool. Just bubbles and surges of power coursing through our muscles - for hours.

The military has had more than 200 years to perfect the mental game. Sure, basic training will strengthen the body physically, but being a sailor, a soldier, and airman, or a Marine is a way of thinking. It's being able to to the right thing when your body is too tired to do much of anything. It's about being "all-in" to the point of death when the situation calls for it. It's about being able to overcome basic human instinct, to not sleep, to be capable of things most people have been taught to avoid.

The mental aspect of basic training plays s huge role in turning boys and girls into men and women. In turning civilians into fighters. In making sure that details are not overlooked when the pressure is high.

On the Soccer Pitch

I've come to the world of coaching and the world of soccer with an eye on the mental state of the players in my care. I know what good work ethic looks like, what commitment looks like, and how to recognize a player who is all in. I've talked with world class coaches looking to recruit players into the EPL. I've gotten a sense of what they are looking for.

How to Work on Mental Game

Not every young person will develop a world class mental game. Some just are not wired for it. Many, however, can develop and improve their mental game. Here are some things that contribute to developing a strong mental game:

I really like this topic of the mental game. You can expect to see more discussion about this in the future. For now, I encourage you to find one thing you can do to introduce the topic of mental game to your young athlete or mathlete. Having the discussion is a great way to be proactive and get kids thinking more about the stuff that really matters.