Imagine youth sports as a buffet as opposed to a take-it-leave-it proposition. Here's the situation today: our pricing is our pricing. The experience is the one we decide we will deliver. I believe we can make a dent in the pay-to-play environment if we do a little bit extra and tailor the youth soccer experiences we offer to the kids who want them.

Imagine gathering a groups of your friends together and deciding you just want to knock the ball around in low-pressure games close to home, but hit the road a couple of times per year for tournaments just to make life exciting. Can you find that in the market today? Can you select the experience you want? Most likely, you can't. Most people are overpaying in my experience - with much of the cost going to things we have no visibility over.  Changing this paradigm requires some creative thinking, but we love creative thinking, don't we? Let's do some now. 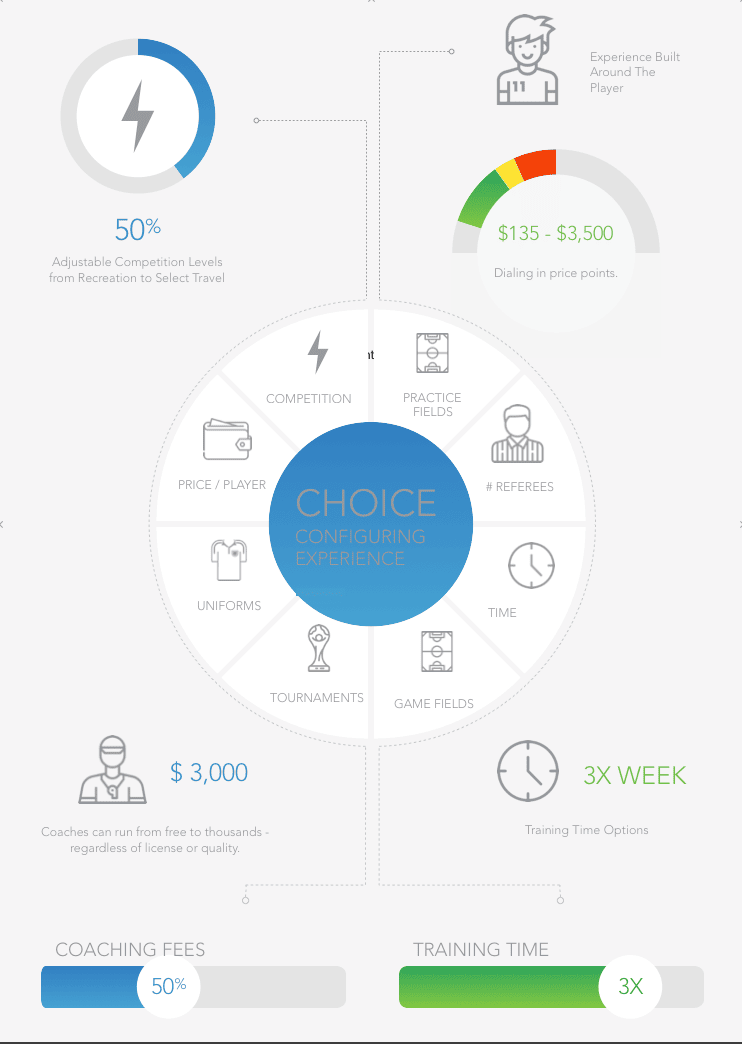 There are roughly eight (8) options that need to be configured in order to construct a youth soccer experience for kids. The market surrounding a club or organization sets some of the cost parameters, but to a large degree, many of these parameters are adjustable.

We might add extras in there like whether or not we want or need specialty trainers, but there is no "perfect" environment for all players. Some players don't need the full treatment. Some just want to kick a ball with friends. Families at all levels of need have a right to find (or create) the experience that works for them.

Here's the inspiration behind this: I can't understand why a game that's played barefoot on dirt in some places needs to cost my families thousands of dollars. Yo might say we need turf fields and expensive coaches, but I'd argue that professionalization of youth sports is fed by lights, turf fields, expensive uniforms,  snack stands, and food trucks. So we really need all this stuff for most youth games?

If we really had a national system of advancement and relegation that allowed teams (preferably over the age of 14) to play up through state, regional, and national rankings; I could see nice fields and sponsored uniforms waiting at the end of the journey. For the 98.6% of regular kids in the United States who just want to play soccer and have fun with their friends, I think maybe not so much. 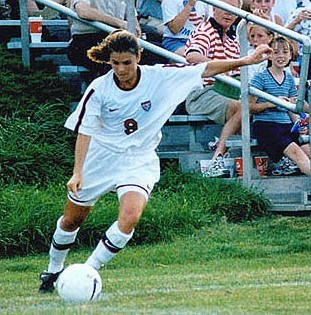 Were Kids Worse Off?

I think kids sweat just as hard, experience just as many emotions, get the same benefits from teamwork, and have to master sportsmanship just as well at $100 as they do at $10,000 (yes, I've recently heard reference to $10,000+ annual cost for some travel programs - though around where I live, it runs between $2,000 and $4,000 on average per year - all in. The thing about regular grass, colored t-shirts (instead of $400 uniform kits), and local play options is: they keep us humble and focused on the stuff that matters vs whether we won or not. Many, but not all, parents who come out of pocket $2-$4K expect wins. When they don't get them, they think they're not getting their money worth.

Should We All Be Playing Barefoot?

Not all of us need to become Edson Arantes do Nascimentto (aka Pele). Just because he started life playing soccer in Brazil barefoot with a ball made of old socks, doesn't mean that everyone has to do this in order to be a great player. Some kids can start playing on carefully manicured grass or turf fields, dress like Nascar race cars, and get chauffeured to and from in the back seat of mom or dad's Mercedes . But considering how many Race Car-like soccer players we put into the men's World Cup this last go round, maybe more kids SHOULD start life barefoot in the dirt. If we make sure the basics are in place. If we do what's necessary for kids to cultivate the grit and determination they need, the character they need to win or lose gracefully, and make it so they have so much fun they can't wait to return to the pitch the next day... if THAT stuff is sorted, then by all means, if they want to go on and play at the national competitive levels, then let's get them there in style.

If you buy into this notion that customizing the environment to player's family and development needs, then you need a practical way to make that happen. As it is today, I do an annual budgeting exercise for my travel teams. Our recreation program is structured to be cost effective already, but it can flex on a team by team basis. Our travel teams might want league play or no league play. High school kids might want to practice 2x per week or 3x per week. Uniforms may or may not be important to a given team. Some are willing to wear whatever, while others want sublimated custom kits for their final senior year.

My point is: there are a lot of levers that can be pulled and a lot of adjustments that an accommodating club can make on behalf of their member families. I've given home to a girls team that used to play for a neighboring club. They wanted an affordable way to play in a local premiere league and push themselves. They had won first place in Division One for the league they used to play for.

In talking with the coach and team manager, we laid out the options and asked what the per-player budget is. I asked what they wanted their experience to look like. We made adjustments up and down on fields, leagues, tournaments uniforms, and coaching fees. We adjusted how many times they could meet, where they wanted to meet, whether or not they wanted or could afford trainers, etc etc. The kids and their families were in charge. Through their coach, we crafted an experience and a budget that made sense for that team. At the end of the day, this team played two outdoor seasons, one indoor season, three tournaments, got brand new one-of-a-kind sublimated uniforms, and kept the whole experience under $800 per player for the year. I even set up payment plans for them so they could pay over time so no one took a hit they couldn't afford all at one time. Anywhere else in this market, that same experience would have cost a minimum of $1,500, but more likely around $2,600.

What I did took a little extra thought and time. I had to know what the overhead was, what was available in the market and at what cost. I had to invest the time to do the math properly so we didn't come up short. But the bottom line was: none of those girls wanted something they didn't' get. Not got stuff they didn't want as a group. And they all paid a fee that they felt was reasonable.

Do you like where this is going and want to chat more about building cost models for your club or local area? Click the "Connect" button up top and connect with me. This kind of stuff is fun for me, so let's have some fun. As always, if you have additional questions, comments or suggestions, feel welcome and encouraged to leave them for me.