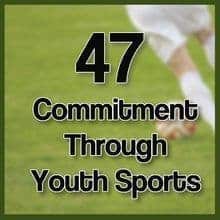 What is so Important About Commitment?

Commitment makes The Soccer Sidelines "Important Stuff" list across all categories: parents, players, coaches, and volunteers. Commitment is a basic building block of the foundation for every youth athlete and is something that each member of a community - from parents and coaches, to organization leadership and volunteers - all have a responsibility to model and promote.

If you're wondering - how can a volunteer influence a player's understanding of commitment, just consider the volunteer who fails to show up for an important job like washing team pinnies. Every player will literally be clothed in the stench of a failed commitment. Don't think they won't notice that some adult didn't follow through on their commitment to wash those pinnies.

Commitment is something that is so ubiquitous in the youth sports environment, that we often fail to recognize it as an important actor in the shaping of our player's character.

Commitment as a Player

For many players, youth sports may not be their first exposure to the concept of commitment, but it may be the most profoundly personal experience with it. The first time a youth athlete experiences lactic acid buildup in their muscles usually comes with being physically and mentally tired, they may be surprised when coach tells them to get some exercise to help them feel better.

Players get a chance to practice commitment every day in youth sports - in both big and small ways. From getting out of bed on time to feeding and hydrating themselves, to supporting team mates, players start to understand the meaning of being "all in." They stand a much better chance of absorbing this message if we are intentional about communicating it - both at home and on the pitch.

Youth sports may be the first environment where players get to exercise their commitment to something bigger than themselves. Committing to a team, to fellow players, to their own development as a way to support their team as opposed to as a way to make themselves look better, or to the game of soccer in general are all examples of this extra level of commitment in action.

I recently had an opportunity to ask a few of my high school aged players about commitment and what they are committed to. A small group of my players did not register in time to get placed on my team. In one case, the player said he registered, but didn't. The second case, Dad wrote me a note asking for his son to be placed back on my team. In the third case, the player wrote me a note explaining why he missed registration and why he wanted to play.

In all three cases, I was looking for clues as to what the player was committed to and how committed they are.  The first player just faded away. It seems that the registration process was too hard, so he gave up trying. The second player was absent as well. His dad was doing all the talking so I got no sense of what the player is committed to. The third player wrote me several paragraphs about why he was late and why we was trying to get back on the team after registration had closed. To paraphrase his comments, they were about being committed to himself and his own fun. I was looking for evidence of commitment to his team mates, to his coach, or to the game of soccer - I only found commitment to himself and the fun he thought he would or would not have.

I can tell you as a coach and as the President of a Club, if a player shows up with a commitment to his team, the sport, his team mates - in short - something bigger than him or herself, I would move mountains to support that player. When all I see or hear in terms of commitment are proxy commitments from parents (who may want their kid to play more than the kid does) - when I see a half effort and then a fold, or if I see the main commitment is selfish, I'm not terribly motivated to go above and beyond.

Now, I might still help, but it's the kids who show that they have commitment to something greater than themselves who really grab attention.

Commitment as a Parent

Players might not be interested in going back to practice at all after a hard workout, but mom and dad remind them of their commitment to be there with their team - to train as a unit, and how important it is to get out there when we made the commitment to do so.

More importantly than the things mom and dad's say are the things that moms and dads do. Parents show by example their level of commitment to each other, to their kids, to other people and projects in their lives. A kid that knows when mom or dad commits to being in a certain place or taking on a task - that's it's as good as done. When a kid sees that when mom or dad make a commitment to a project and don't just do the bare minimum, but make sure that the job got done right, the lessons of commitment rub off.

Parents are committing right alongside every youth athlete to support them on and off the field: driving duties, buys gear, helping them to manage their time between homework, other life obligations, and practicing on and off the pitch. Parents who support a player who wants to go out and put some more touches on the ball, who help kids balance multiple commitments, and who make sure player's honor their commitments to their team SHOW, in what amounts to a powerful lesson, the importance of commitment in life.

One great way to be obvious about commitment is to volunteer to help out in some way with the Club, school, or other sports organization. Players are volunteering, right? So are Mom and Dad. When Mom or Dad volunteers, it sends a clear positive message to kids: what you're doing matters, we're in this together, and I am committing right alongside you. Volunteering provides ample opportunity to demonstrate commitment in real ways.

Commitment as a Coach

All of the items above make for great pre and post practice discussion topics during the season. If players are old enough to participate in an adult supervised (two adults) text chat group, then these topics can (and often do) come up in the off season as well.

Coaches, in my opinion,

I once had a player show up at one of my practices. Practice as already in session, and I was surprised to see him. This young man is athletic, dedicated both on and off the pitch, and one of many players I truly enjoy coaching. But I wasn't happy to see him that day.

He was playing for another team, and his other team had a game that day. It turns out that he left his team to come to my practice. He explained that his coach wasn't coaching, that the team wasn't doing well, and that he wasn't treated the way he felt he should be by the other coach or his team mates.

I was personally flattered that he had chosen my team over the other team. My boys had frequently talked about how the coaching they got on my team was much better than the coaching they were getting on their other team. I guess I could have praised him for making a great decision and getting a good workout in instead of playing a kind of soccer I personally find unappealing.

However, he knew he had done something wrong when he saw my face. "Did you make a commitment to that other team?" I asked him.

"Are your team mates out there playing right now without your support?" I asked him.

"Yes." I said. For better or worse, when we commit to a team, we need to be there for our team. They might be thinking the same kinds of things you are, but they are there for each other, and so should you. If you don't feel like you can  commit to a team - all in - maybe you should reconsider joining that team at all."

He said he understood and I asked him if we could use this as a learning moment for the rest of our team. I knew I had others on my team who were also contemplating defections from teams they were playing with that season & thought this was a good opportunity to talk about it. He agreed. We gathered the team, and we talked about the meaning of commitment and how important it is whether we're playing soccer or managing a project at work later in life.

As a coach myself, there are many days when I just don't feel like crafting a session plan and spending two hours on a soccer field. Life outside of soccer is often pulling me in other directions.

The same is true of my own training and education. Every season, I commit to learning a new skill picking up a new license or taking a new course in something that will enhance my abilities as a coach. I tell my players in the beginning of each season what I have done to improve myself as a coach and go on the tell them that I expect the same level of commitment from them - both on the pitch and at home - as I give them season after season.

Commitment as a Volunteer

What you do as a volunteer is a lot less important that the fact that you do it and how you do it. When you volunteer, you will immediately stand out to kids. Not everyone volunteers. Those who do will attract curiosity and people will notice.

One thing my father-in-law, a man who was my personal hero for many years while he was still alive used to say: " Any job, great or small, do it well or not at all."

Of course, he got that saying from his Dad. And he took it from someone else. I have no idea who first issued those words, but when you see someone living them, it stands out as special.

My own parents used to tell me that it didn't matter if I was a ditch digger or the President of the United States, whatever job I took on, I needed to take pride in and do the best job I could. It was never good enough to do just what everyone else thought was good. The bar was always higher for me. It was the best job that I thought I could do - which was generally always more than what other people would give me credit for.

The youth sports environment is great for teaching kids the value of commitment. It takes daily attention to the little things to make commitment real in kid's lives. It takes adults working in the environment modeling Commitment to affect the memories of kids when they are old enough to think back on their days as youth athletes.

It's important that we not underestimate the importance of modeling commitment in our own lives if we want our kids to pick on that and adopt commitment as something that is important to them.