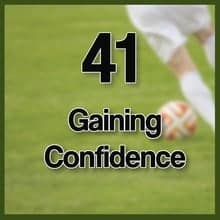 One afternoon during a practice session, the mother of a young girl on my team approached with a request. "Can we do something about my daughter? Her confidence is low. Her sister plays at home and her confidence is growing. This is causing some conflict at home and I want to see both daughters enjoying themselves."

I love when parents approach me like this. I lifted my clipboard and pointed to an empty space. "See this space?" I asked. "I use it to remind me of things I need to keep an eye on. I'm going to write her name here and from now on, we're going to work deliberately on her confidence."

For the next several weeks, I paid special attention to what this young lady was doing. I ignored her curves away from the ball. I ignored the arms that flew up in defense when she came within 10 feet of an opponent. I searched with intention to catch her doing something right. I went out of my way to repeatedly point out when she did something right. Slowly, her fear seemed to subside.

Two games later, she was playing right midfield, got the ball and almost accidentally broke through the first line of our opponent's defense (their midfielders). She stopped in surprise and looked my way. Both thumbs went up and I yelled with a big smile "Your Doing Great! Keep Going!"

A moment later, she broke through the second line of our opponent's defense (the defensive line). She was now between the defensive line and the goal. Only the goal keeper stood between her and a score. She lost her nerve and punted the ball away to a team mate who was attacking far post. The team mate controlled the ball, drew the goal keeper and returned the pass to this young lady. The ball hit her in the thigh and went in the goal. She scored her first goal ever!!

My bench came aline. They all stood up and screamed like crazy people. This young lady forgot I was even there and looked in the direction of her parents who were also out of their chairs at this point on the opposite sideline. Her face exploded in a smile and she jumped in the air from an uncontrolled enthusiasm. Her team mates - the rest of my team who was already on the field burst in a chorus of cheers and encouragement.

This moment would likely be a moment when this young lady found confidence. It would be a moment she would remember for a long time to come. It was time to cross her name off my clipboard. I smiled and drew my line with a satisfied grin I could not myself control.

Inaction breeds doubt and fear. Action breeds confidence and courage. If you want to conquer fear, do not sit home and think about it. Go out and get busy.

Confidence can be a tricky thing. Too much breeds arrogance. Too little handicaps us. Ultimately, the finest form of confidence comes with humility wrapped in a comfort in our own self worth and abilities. It takes effort to achieve. It takes belief to inspire action that leads to effort that leads to achievement.

Inspiring confidence is one of the things I love the most about coaching in youth sports. Learning to be confident is one of those things I believe serves us throughout life - well beyond the soccer pitch.

Kids, I have found, come in two varieties. There are probably more that have been classified by experts, but to my eye, there are two big ones that stand out.

The first archetype is the one that believes that skill comes through effort. This type of player is easy to coach. They understand that wherever they are on the skill spectrum is a function of how much effort they have put in. To move further up the skill spectrum, they simply need to put in more effort. If they slack off, the know they will slide down the skill spectrum. The correlation between skill and work is clear in their minds. They respond to constructive feedback. They are more likely to say "I will..." or "I can..." and less likely to beat themselves up for not having a skill mastered yet.

The second archetype is the one that believes they either have  skill or they don't. Skills, to these players, are something some people have and others do not. We might be able to fine tune a skill, these people believe. But maybe it's better to go try something else that they may be better at. These types of kids are drawn to the activities they get recognized for. They are more in tune with external praise or criticism and less able to find the self- discipline to improve their situation. They are more likely to say "I am..." or "I am not..." and more likely to be embarrassed by not having a skill that their peers do when their peers have it.

The Approach to Building Confidence

I often observe players for the type of personality that is dominant on the field. I am searching for self-focused "have" or "don't have" types, and those who seem to understand the value of effort. I test my assumptions and adjust as necessary to be sure I am using a language and style that is most appropriate for the player I'm working with.

I have no evidence. but I think most coaches and parents find it easier to work with players who naturally understand the relationship between effort and skill. We've been taught a million ways to help players improve a skill, but only those who understand that the skill in on the other side of effort truly seem to understand what they need to do and go do it.

The type that either is or is not requires a slightly different approach. My language changes when I approach these types of personalities. Instead of saying "You're here now and if you do X, Y, or Z, you'll be there." I might say "You're naturally good at X, Y, or Z. I bet you could also do A, B, and C."

The focus of my approach is different. On the one hand, I'm addressing behavior and level of effort. On the other hand, I'm addressing self worth and encouraging more of the player's greatness to show. The differences are subtle, but important. The latter type does not respond to level of effort discussions well. The former type doesn't care about what I think of their greatness. They're more interested in what's needed to get to the next level.

Confident players attack and defend with more energy. They are decisive. They have energy to spare for other players. They learn skills more quickly. And they are more eager to take on the next challenge. I love the fact that confidence shortens the learning curve and greases player's relationships with other players.

Players who lack confidence can be awkward, shy, hesitant to take risks, and take a longer time to learn. If there is any one thing a coach or a parent can do to improve a player's game (and life) it would be to teach them how to find confidence.

Youth sports are loaded with opportunities with work on confidence with players. By making the time and deliberately engineering confidence boosts into a youth sports program, the entire program will be elevated and kids will have more fun.

Bringing Confidence to the Field

Pretty much everything I said in the section about bringing confidence to the field applies to bringing confidence home. If mom and/or dad allows their players to make mistakes, encourages small victories, overlooks the errors they made while making effort, and leaves them with a deep understanding that mom and dad love watching me play no matter how many mistakes I make, they will come to the field ready to enjoy and have fun.