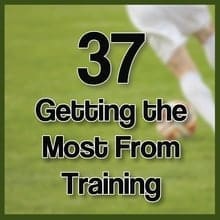 The World Cup is Coming to America

There isn't an American soccer player who isn't already talking about and thinking about the World Cup in 2026. The excitement such a world-class event will bring to our continent is huge! That said, there is also a lot of thinking going on around not only how do we get our US team into the next World Cup, but what we have to do at home to bring our game to the next level.

Discussions are already underway and escalating in some very positive ways. Keeping in mind the mistakes made in the US Men's soccer community over the years (more on this later), I propose that we're going to win if we need to come together. If we can identify the best of what American soccer has to offer and create something new that serves a much larger population - rather than arguing which is best and/or charging the cost of kidneys to play - we will produce a cohort of players that are every bit as good as the best players found elsewhere in the world.

Soccer training is a mixture of art and science. Ignoring cost for the moment, selection of a soccer training method is often driven by these (number) things:

Though parents are often not aware of the various methods and tool available, their perception of what should be done has a big impact on the selection process. If a parent doesn't see what they expect, they can pull a player out of a program and place them in a program they think is more "soccer-like." We see this all he time. Some methods / tools can take longer than others, but also have a profound impact on development of a given player.

The same is true for players. If a player has a pre-conceived notion of what they should be getting from soccer training, and doesn't like the particular methods being offered, they can lobby for a change to a program that is more in line with their expectations.

Geographies seem to develop their own style. I think this has a lot to do with the people living in that area. I could write an entire article about the pressures that different cultures put on soccer development, but I'll save that for a future episode.

Methods and tools have different names and entire schools of thought have been built around each. Getting to know each of the methods and tools available can be a daunting task - especially when, like me, a coach believes in implementing more than one for player development.

Here are some of the more common methods used to train soccer players:

Become a subscriber member of our community and have The Soccer Sidelines newsletter delivered directly to your inbox each week.

Variety and Balance are Key in My Opinion

Some coaches will swear by one method or another. Those trained using the Coerver method of training, for example, may develop players using this method almost exclusively. Lets talk about this method as an example of what I mean by variety and balance.

I'm not a Coerver trained coach. I should say that up front. I've read on the method. I've got kids who trained with the method. I've seen and had kids who played on teams that trained exclusively with it. I've talked with coaches trained in it. And I've recently employed it to train 17 kids in a development camp conducted by our Stoke City academy partner in the State of Maryland.

What I know of this method is that it focuses mainly on individual development and skill. Control on the ball is emphasized. Individual skills are emphasized. The end goal seems to be solid individual players who have good skills and confidence on the ball. I consider the method useful for achieving this goal.

I also consider the method flawed when used exclusively to train players. Soccer is not an individual sport. It requires a team, strong teamwork, and group movements both on and off the ball. I subscribe to the "bundle of sticks" philosophy that I described in an earlier episode. A team that works together is stronger than any individual player.

That said, knowing what i know now, I would consider an alternative method (team and tactics development) without a healthy dose of individual development to be just as flawed. We need good technical players on the ball. We need for that first touch, that cross, and that pass out of pressure to hit their targets. We need players to be comfortable with the ball at their feet. A method like Coerver teaches this really well.

Find The Right Balance and Variety

Getting familiar with the variety of options available is an important first step. I've provided some resources below that will help get you started in that direction.

As the Maryland host for the Stoke City North American Academy, I recently had the privilege of hosting both an ID camp in June and a Development Camp in July for players in the Maryland, Virginia, West Virginia, and DC areas. The method Stoke coaches used was a combination of Coerver, some proprietary stuff, and guided discovery. I saw first hand the effect that it had on players in age groups from 7 - 18.

Many of the players participating were from my own high school aged team. I learned a few things in the process of conducting those camps. Most notably: there is a time and a place for each of the different methods.

In a summer session, apart from any regular season play, players benefit from individual development. Their confidence on the ball goes up and their ability to execute more complex phase of play and tactical progressive training sessions goes up. As a coach, working with more skilled individual players makes the job of coaching tactical progressive sessions a lot easier. It helps to have the confidence that a player has command of the basics and the three feet surrounding their bodies. Putting these players together later in a tactical progressive session can result in a faster learning curve and a better session all around.

On the other hand, training individual soccer skills exclusively during a regular season seems to be a poor use of time. Players are a lot stronger when they play together. When shapes move across the field like a single organism, when players anticipate the next three moves and maneuver with and for each other on the ball and off the ball, a team can do some pretty great things! As a coach, I would not want to sacrifice team movement and synergies for a field full of individual technically gifted players who can't find one another. Soccer is not about great players playing next to one another. Rather being successful is about players playing with one another.

There is a time and place for each of the various training methods. There is even a time for zero training at all - just good old fashioned street soccer - kids getting together and knocking the ball around together. I believe it's important to provide a good mix of structured and unstructured opportunities for kids to play. In the structured forums, it's a good idea to include both individual technical development and team-oriented development.

In the off season, games like futsal, development camps, and unstructured play opportunities can be powerful additions to individual player development. During regular season, individual technical progressive or Coerver-like training sessions can augment more team oriented methods. They can be used as warm ups or as added value activities outside of regular team training. But learning to work together as a team takes precedence in the regular season for me - especially in the older 14-and-older age groups.

Each parent and player should interview potential coaches in the lead up to a season. Find out what their coaching philosophy is and what training methods they plan to employ. If what they tell you doesn't make sense, ask them to explain their method and why they prefer it. If it still doesn't make sense, or if it doesn't seem like a good fit, then find a coach who does for your family.

Resources in Support of this Article

#20 – Protecting Our Kids From Predators_Youth Protection