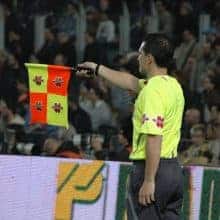 Arguably the most difficult and most argued about call in all of soccer, the offside rule has given plenty of sideline enthusiasts, coaches, players, and referees alike a lot to talk about. In this episode, I will break down the four conditions that must be satisfied to result in an offside foul, give you the one timing component that makes all the difference, and share the difference between being in an offside position and drawing an offside foul.

As much as I'd like to say that after listening to this, you will be an expert at spotting offside fouls, I can't. It will still be confusing and it will still be dependent upon variables - including the referee's perspective and opinion - that will be impossible to get right every time. At least you'll know why this call is so hard, and can explain it to your fellow enthusiasts when it becomes a point of contention.

[spp-timestamp time=”01:26″] The most difficult call to make

[spp-timestamp time=”04:00″] Being in an offsides position without committing a foul

[spp-timestamp time=”05:40″] Condition #3: Nearer the opponent’s goal than the second to last opponent

[spp-timestamp time=”06:29″] Condition #4: Participating in the Active Area of Play

[spp-timestamp time=”09:42″] How can a player participate in the active area of play?

[spp-timestamp time=”10:09″] Not even touching the ball and drawing a foul anyway

[spp-timestamp time=”11:57″] Just having some fun with an even more complicated scenario

#57 – Take Advantage When The Development Window is Open